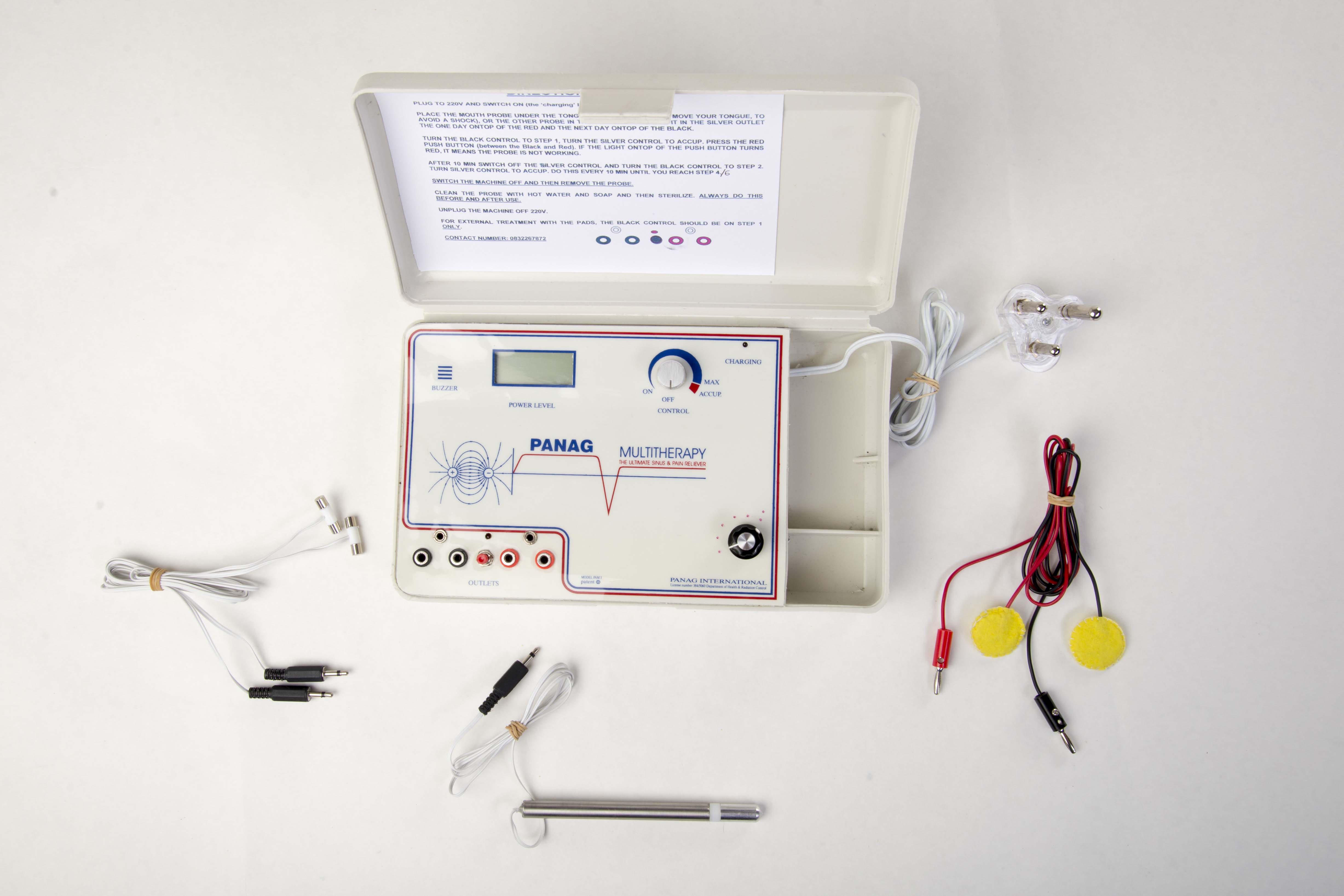 Because of this prostate inflammation, the bladder muscle becomes gradually stronger, thicker and overly sensitive beginning to contract even when it contains small amounts of urine. Consequently, the bladder muscle cannot bear with the urethra narrowing so urine remains in the bladder and it is not completely emptied.

The direct causes of prostatitis are not fully known but its symptoms are clear. Discomfort, difficulties and pain during urination are the main symptoms to detect chronic prostatitis.

The Panag Multitherapy Unit treated successfully several cases of chronic non-bacterial prostatitis in the comfort of their houses. Depending on the age but in a period not longer than 21 days the inflammation subsides.

Endometriosis is a chronic, painful and debilitating gynecological condition that affects millions of women worldwide. It occurs when tissues that normally line the uterus are found outside the uterus. This misplaced tissue develops into growths or lesions which respond to the menstrual cycle in the same way that the tissue of the uterine lining does.

The exact causes are still speculated about, but the role of an inflammatory and immune involvement has been recognized as far back as 1964.Lately more and more scientists are recognizing that the immune system, and more so the imbalance of the immune system, is involved if not responsible for the occurrence of endometriosis It is these growths of the tissue in abnormal locations that cause the painful episodes.

The use of Panag in endometriosis

The body consists of an electrical side (CNS, neurons etc.) and a chemical side. Both sides have to be functioning effectively and in cohesion for the body to remain healthy. Presently, the vast majority of medical scientists have been concentrating on the chemical part of the body resulting in, the electrical part remaining untreated.

A couple of experiments where certain nerves of the body have been stimulated effects on both immunomodulators and prostaglandins have been noted. (Nakamura et al., 1996) showed that IL 6 decreased in the kidneys of rats after electro stimulation of the renal nerve and (Hosoi et al., 2000) showed that Interleukin (IL) 1 beta was increased in the brain of rats after electro stimulation of the vagal nerve. Further evidence to the theory that electro stimulation modulates the prostaglandin and Interleukin concentration are found in the results of a study done by(Sokolova et al., 1990) on the prostaglandin (PG) E2 levels of mothers and their newborn infants after suprapubic and sacral transcutaneous electrical stimulation.

It is thus clear from the above literature that electrotherapy can modulate the cytokine and prostaglandins levels and affect the immune system of the body.

The PANAG Multitherapy device was developed and licensed by the FDA (U.S.A) so it’s completely safe. It transmits electrical impulses very similar to those generated naturally by the human body. The treatment works mainly on the immune system as seen clinically during treatments. When the immune system is functioning properly it can fight any kind of disease. The device’s fast and consistent action can be attributed to the fact that it is introduced directly into the body. This unique type of therapy opened way; to internal electronic treatment as all other devices are always applied externally.

Doctors report excellent results using the device in combination with chemotherapy. Panag treatment given at the same time as chemotherapy greatly reduces many of the unpleasant side effects associated with the therapy such as:  painful mouth ulcers, diarrhoea, weight loss, changes in white blood counts and platelet counts which makes them more susceptible to severe infection for example pneumonia etc.

The therapy is easy and painless, has no side effects and can be used at home by the patient. The device cannot replace conventional medical treatment including chemotherapy. Panag Multitherapy is not intended to diagnose, or prevent any diseases. Stopping any existing prescribed medical treatment must only be done in consultation with a health care practitioner.

It has been successfully used in combination with chemotherapy by patients suffering from: Prostate Cancer, Breast Cancer, Non-Hodgkin's Lymphoma, Esophageal and Stomach Cancer, Throat Cancer, Colon, Liver and Kidney Cancer. All patients reported that their appetite had improved dramatically, they gained weight and their pain subsided after a short period of time.

We are a group of Doctors and Scientists that have for the past ten years, been trying to evaluate the progression of this device. The effectiveness of the treatment can be proven, at any given moment.

The PANAG Multitherapy device was developed and licensed by the FDA for the relief of pain and successfully used in the treatment of such for a number of years. Six years ago we started to treat patients with HIV/AIDS (full blown AIDS) for their aches and pains and observed that there was improvement in their other symptoms as well. We also started to closely monitor patients with AIDS who were using the machine finding increases in platelets (in patients that had thrombocytopenia), CD4 counts and dramatic reductions in viral loads.  In patients who had their CD4 counts monitored there were increases of between 36 –106%. Patients who showed thrombocytopenia showed increases in platelets back to just inside the lower limits of normal. In patients that we could monitor very closely we noticed that their viral loads decreased from between 49- 83% in a period of 28 days. For example, the viral load of a patient was reduced from 1 260 000 RNA copies per ml of blood to 270 000 in a period of 12 days. In the treatment of secondary symptoms the results were just as phenomenal with reported cases of Herpes disappearing in as little as 5 days of treatment.  Oral thrush cleared up in the same time period. Symptoms like diarrhoea stopped after one day’s treatment. Symptoms of TB disappeared in a few days. Patients reported an immediate increase in appetite and asked for food after the very first treatment. The skin rashes that are normally associated with AIDS disappeared within one to two weeks of therapy. All patients reported that their quality of life improved dramatically and many of them recovered from being bed ridden and went back to work.

The Panag Unit has been used by sport professionals from different disciplines such as athletics, swimming, rugby, cricket or soccer since 2006. This device has reported fast recoveries from strong fatigues after competition only with one hour use. Due to the nature of the Panag Unit and its direct impact on the immune system, the body reacts rapidly reactivating and balancing an exhausted immune system.

The damage and elongation of joint has been treated with almost total recovery after one treatment. The patient feels no pain and the inflammation reflected is almost none.

The Panag Unit is also used as a preventive measure to keep a balanced health. The device allows athletes to maintain a constantly strong training systems without alterations on the physical condition and speeding recoveries from extreme training loads.

Having erection inconvenience occasionally isn't fundamentally a reason for concern. On the off chance that erectile brokenness is a progressing issue, nonetheless, it can bring about anxiety, influence you're fearlessness and add to relationship issues. Issues getting or keeping an erection additionally can be an indication of a hidden wellbeing condition that needs treatment and a danger component for coronary illness not far off.

Here and there, treating a hidden condition is sufficient to switch erectile brokenness. In different cases, pharmaceuticals or other direct medicines may be required.

Osteoarthritis causes ligament — the hard, tricky tissue that covers the closures of bones where they shape a joint — to separate. Rheumatoid joint pain is an immune system issue that first focuses on the coating of joints (synovium).

Relentless exhaustion issue is a trapped issue depicted by awesome depletion that can't be cleared up by any fundamental remedial condition. The shortcoming may heighten with physical or mental activity, yet doesn't improve with rest.

The explanation behind relentless exhaustion issue is dark, though there are various theories — running from viral defilements to mental tension. A couple of experts trust interminable depletion issue may be actuated by a blend of components.

Resistant system issue cause peculiar low development or over activity of the protected structure. In occasions of safe structure over development, the body attacks and damages its own tissues (invulnerable framework afflictions). Safe insufficiency diseases lessen the body's ability to fight interlopers, conveying on shortcoming to pollutions.

As a result of a dark trigger, the safe structure may begin conveying antibodies that instead of fighting infections, ambush the body's own particular tissues.